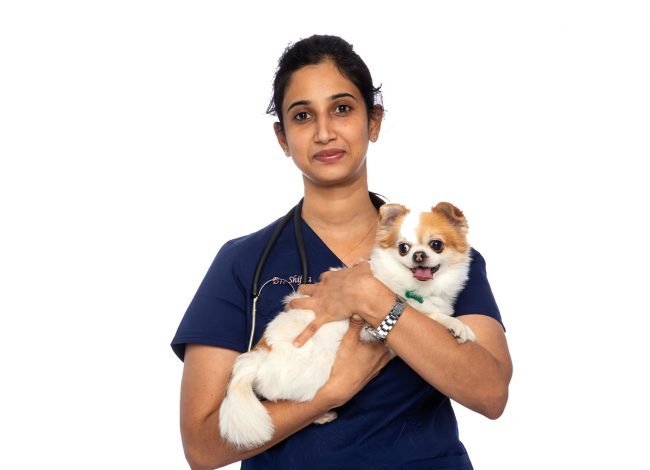 Dr. Shifna grew up in a home that welcomed all animals; she grew up around cows, dogs, cats, and rabbits. As a result of her surroundings she decided that one day she would love to become a veterinarian in order to help as much as she could with animal welfare.

After graduating from the Kerala Veterinary and Animal Sciences University in India with a BVSc & AH degree in 2013, Dr. Shifna went on to work at a small animal practice where she handled outpatient care for the most part, such as administering vaccinations and deworming treatments, microchipping pets, and so forth.

In 2015 Dr. Shifna relocated to the U.A.E. with her family and began working at a small animal veterinary practice in Dubai, where she remained for 6 months. At the end of 2016 Dr. Shifna began working as an assistant veterinarian at the Laboratory animal facility for Gulf Medical University in Ajman where she acquired knowledge on basic laboratory work and in animal husbandry.

In August of 2018, Dr. Shifna became a part of the team at the American Veterinary Clinic in Abu Dhabi where she came by knowledge on phlebotomy, routine TNRs, routine dental treatments and so forth. Her skills as it relates to vaccinations, pre-anesthetic cat grooming, consults had also improved drastically while there.

Dr. Shifna has always had a special interest in veterinary cytology, microscopy, and lab diagnostics. Her area of special interest lies within urine smear analysis FNAs, and clinical nutrition.

In December of 2020, Dr. Shifna joined the British Veterinary Hospital in Dubai as an assistant veterinarian where she had the opportunity to work with a larger team, acquiring basic knowledge in ultrasonography, CRIs in pain management for pets, and learning new protocols with regards to managing various forms of diseases in small animals.

Dr. Shifna has a cat back home in India named Billy. She also had a pet dog named Tiger, but unfortunately lost him a couple of years back.

MVC al Wasl has been nothing but amazing for us! We adopted from there - FIV + cat with some minor difficulties with leg wound. From front desk to the nurses to the pet taxi to the vets, everyone here is so helpful and professional.
- Josh Shepherd
I am very happy with the Modern Vet clinic and Hospital. The entire team is very professional and proactive.
- Danielle aychouh
THE ONLY MULTI-SPECIALTY 24 HOUR HOSPITAL IN THE UAE!
Book now